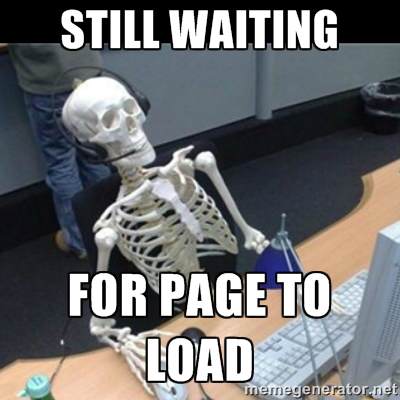 A few years ago, we worked with a very lucrative Midwest-based property management company, who sought out our services for their website. At the same time in which we were enhancing their Internet presence, they were also changing their management software from an antiquated program (think second Clinton term era) to a more streamlined and user-friendly program.

Having developed close relationships with their IT staff, I was often kept in the loop as to the progress of the software switch. After the launch, the new program crawled to the extent that employees returned to the DOS-based Clinton era software. Unfortunately, the property management company was tied to the new program contractually, and it would be several months – and ‘excruciating” ones at that, according to the IT head – before the kinks were worked out. Meanwhile, prospects and anyone else wanting to access the company’s site had to have the patience of a saint or bounce – the majority of them bounced.

How Site Speed Affects Your Sales

Significant loading time can be a factor in making or breaking a sale or scare off prospects from making further inquiries into a company’s operations. In an infographic provided by Kissmetrics, the following data was revealed related to consumers and page load time issues:

Could your site benefit from loading faster? GET A FREE SITE SPEED ANALYSIS

Additionally, Amazon reported that a 100-millisecond increase in page speed translated to a 1% increase in its revenue. In 2010 Google announced that page load time is part of their ranking algorithm. If all this isn’t enough to convey the significance of page load speed to a business owner, I don’t know what is.

In the end, our overall goal is to have our clients up and running come the day to go live, glitch-free and optimized. We want our clients’ to profit from our work on their websites and for their consumers or viewers to spend quality time purchasing their goods or services, not waiting to see what they have to offer and, in the end, go somewhere else.

The Leverage development team tests the speed and usability of your site before launching, and is able to diagnose and fix page loading problems your site may currently be experiencing, whether they be due to a lack of image optimization, files that need to be compressed, web hosting, setting up browser caching or minification of Java and CSS files.

To talk to one of our design experts on how your design or coding may be affecting your web site speed, contact us now by phone or form and we’ll get back to you right away with some answers.

Breaking Away from Tradition: New Uses for SEO Research
Scroll to top